Slogan: "The Motion of the Potion!"

Posted by 1ofWiisdom at 4:06 AM No comments: 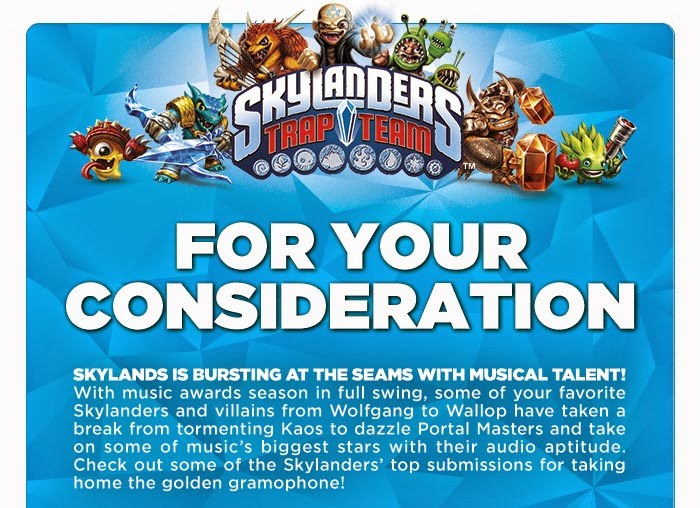 Take this link to see larger pics AND watch the videos: Skylander Club Music Awards 2015
Posted by 1ofWiisdom at 3:57 PM No comments:

Posted by 1ofWiisdom at 3:03 PM No comments:

What: Skylanders Valentine's Mailbox
Where Did You Get It:  Gift (Walmart)
What Did it Cost: $3.98 plus tax
What is Included: Skylanders Mailbox, (2) Sticker Sheets

I have to say, this thing is pretty cool.  The quality is great, especially given the $4 price tag.

The only  real downside is that this seems ideal to come packaged with Valentine's cards, but I am sure they aren't hard to find.  The stickers weren't exactly "Valentine" themed, but were cool nonetheless.

I think this would excel at being opened and then stocked with a Skylander, Trap Master, a few Traps, and some favorite candy for your favorite Portal Master this Valentine's Day!  Plus, after it is cleaned out of candy and Skylander gear, it makes for a very nice tin for whatever you want (candy, cash box, Skylander storage, and so on).

I definitely think this is a good value and has a lot o options!  It would no doubt go great with Love Potion Pop Fizz as well!
Posted by 1ofWiisdom at 3:06 PM No comments:

Posted by 1ofWiisdom at 5:57 PM No comments:

Posted by 1ofWiisdom at 3:27 AM No comments:

What: Shining Ship Light Trap with Rebel Lob Goblin
Where Did You Get It: GameStop
What Did It Cost: $5.99 plus tax
What Was Stock Like: Several on hand, more in the back


Enough ice melted and the crowds had thinned, so I was able to make my way up to GameStop...They got stock of this trap awhile back, but I am not a fan of driving on ice when I don't have to...

Anyway, I picked the trap up and got a flyer for their Skylander Day this Saturday, so be sure to check that out!

Rebel Lob Goblin is pretty cool in game and what's more important we have a 2nd Light Trap and it is in a very cool sculpt (Rocket) as well! 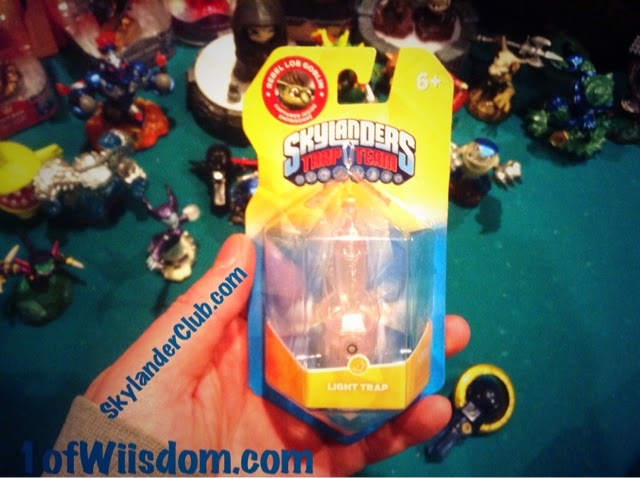 Posted by 1ofWiisdom at 5:02 PM No comments:

Wildfire is one of those rare characters where one path really seems to be superior to the other.  That is so much so the case with Shield Slasher over Chain Champion, that I think I will reset my Dark Wildfire and take him down Shield Slasher as well.

Shield Slasher is portrayed as a trio of combo moves.  You get a bash, spin, and slam.  However, each one of these upgrades also increases the damage numbers associated with the base Traptanium Shield Bash!  It takes the already potent Shield Bash and elevates it to juggernaut numbers.

Chain Champion is unique, but it begs to question why you would want to "pull in" 5 enemies at the same time that you'll have to work hard to kill with your Shield Bash limited to 1 upgrade "Hotter Heat Shield."  The attack damage increase across this path is so small compared to Extra Chains in the base upgrade tier that you have to question if it is worth taking regardless of your tactics.  Your "wider" area is also taken back some due to the constraint of "only 5 enemies."  But again, why bring in 5 enemies the Chains won't kill on the way only to get overwhelmed by them?  It isn't an issue on easy difficulty settings, but I can imagine it wouldn't be pretty in Nightmare Mode.

It is certainly plausible that you could fend enemies off with Hotter Heat Shield, but comparing it to Shield Slasher will leave you disappointed.  Plus, when you take Shield Slasher you can still pull in 3 enemies if that is your cup of tea, and make quicker work of them.  Blazing Breath (Fire Roar) is cool, but the unidirectional line of fire and inability to move coupled with the slow attack time makes it more of a hindrance than benefit (I still think it is cool though, and really would have liked to see the Soul Gem make use of a final enhancement).

Oh, and speaking of the Soul Gem, it is unique, but not practical.  If you happen to incidentally delve into it you can unleash some significant damage, but it is really more of a "look what Wildfire CAN do" as opposed to, "I'm going to burn thru this field of enemies."  Oh, and just in case you needed more reason to take Shield Slasher, it also grants higher damage to the Soul Gem abilities.

Yep, pretty one sided.  My official endorsement for players of all skill levels is Shield Slasher.  Chain Champion isn't bad, but it is well short of what you get with Shield Slasher.
Posted by 1ofWiisdom at 3:05 AM No comments: