Skylanders Battlecast Quick Start Guide & What You Need to Know So, this just showed up at work this afternoon: 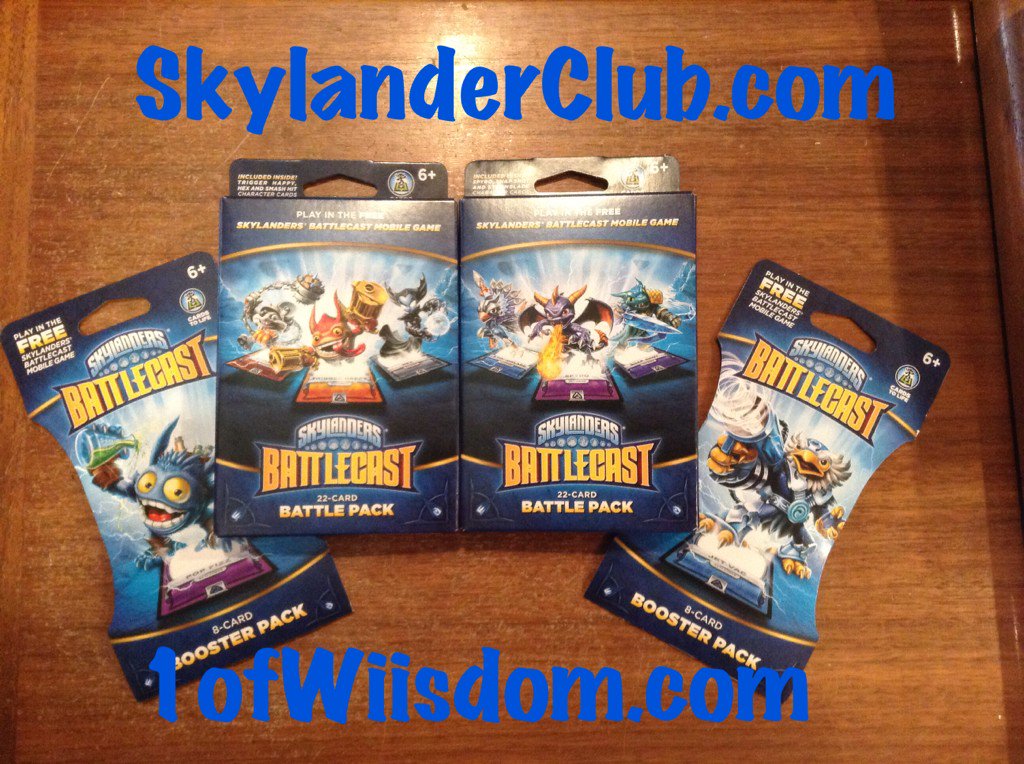 Yup...Skylanders Battlecast is here!  Technically, it was out a day early in the app store, but the cards hit retailers today, Tuesday, May 24th, 2016.  If Battlecast sounds familiar, it should...each Starter Pack for Skylanders SuperChargers included (2) Battlecast Cards, Spitfire and Stealth Elf.

You probably remember the cards now, but might still be wondering just what Battlecast is...hopefully this will help you!

Skylanders Battlecast is a free-to-play mobile game that you can download from Amazon, the Google Play Store, or the App Store for Apple people.  Unlike recent entries that are full games on-par with the consoles, this is different.  That said, it isn't like Battle Grounds, Cloud Patrol, or Lost Islands either.  Skylanders Battlecast is a stand-alone card battling game...yeah, like the super popular entries you watch on Twitch, but with your favorite Skylanders and similarly themed attributes!  Got your attention now?  Good!

Let's keep this simple and run down the basics...you know, the stuff other people overlook that makes you continually rely on me to provide you with the pertinent and thorough details you crave...

Q: What does Skylanders Battlecast cost?
A: It is free to download and free-to-play, but will offer in-app and external purchases.

Q: Okay, I want the cards...what do the cards cost?
A: While I am unsure of in-app pricing, I can tell you retail pricing...we will cover that soon!

Q: Battlecast is a mobile game...so I can play online with my friend, right?
A: You bet!  Let's take a look at the game modes.

Solo
-Player vs CPU in a Single Player Campaign

Multiplayer
-Casual PvP: Just for fun...play your friends, test decks, hone your skills...no loss in rank points.
-Friends List: Same as above, but ranked play...bring your best deck and A-Game!

So, you are a completionist...a Portal Master supreme...a collector of the rare and exotic...a person with more Skylanders than square footage.  You might be asking yourself, "Well, I've never played a card battling game...might not like it, but the cards are cool and I want to collect them...is there a point?"  Why yes there is!  Similarly, you should give the game a shot too, but let's break down the cards.

There are Four Card Groups

-Character Cards
There are currently 24 Character Cards (Spitfire, Stealth Elf, etc.), that include an assortment of characters from all the games installments.  I have no info on if the game will expand to gradually include more (ie everyone), but I certainly hope so.

Now some of you are thinking, "Cool!" and other are more on the lines of, "Hmm, idk...I really wish there were super rare cards I could try to track down."  Well you are in luck!

You had be expecting this, right?  Well here is what I know so far...

There are Four types of cards

As best I can tell, these are identified by a colored key on the card:
Common=Gray, Rare=Blue, Epic=Purple, and Ultimate=Gold

This likely also corresponds to the Gold and Silver Foil Variants.  I will update as I learn which is which.

This takes us back to an early question...here is what I can tell you.  The common way to acquire cards will be as follows:

Battle Packs $9.99
-Two versions are available and each contains 22 cards, including 3 specific character cards
--Battle Pack 1: Spyro, Stormblade, and Snap Shot
--Battle Pack 2: Trigger Happy, Hex, and Smash Hit
---These are can't miss...you literally see a box that has Spyro, or Trigger Happy front and center.  The (3) Skylanders featured are given...the rest of the cards will be random.

Each Battle Pack will include:
-A Deck Box
-22 Cards
-A Trading Shield
-Collection Poster & Beginner's Guide Once you have made your selection, or OP Battlecastered (is that a word?  It is now!) and acquired both Battle Packs, you can expand your deck by way of Booster Packs.

Each Booster Pack will contain (8) random cards and a chance to collect the Rare Gold and Silver Foil Variants you will likely seek.  Right now, I only know of (3) different character fronts: Jet-Vac, Eruptor, and Pop Fizz.

So, both Battle Packs and Booster Packs aren't enough to satisfy your completionist side?  Here are some other options I have found online:

The Ultimate Stater Pack is actually a pretty sweet deal if you plan to go all-in on collecting, or get addicted to the gameplay...or both.

Aside from my ultra swanky, hand signed screen-grab, here is a text run down of what you get:
-(2) Battle Packs (Spyro and Trigger Happy)
-(9) Booster Packs
-(1) Sweet Carrying Case

Doing the math you'd have $9.99x2 for the Battle Packs and $4.99 for the Booster Packs.  Simple rounding and quick math dictates these items wound run you $20+$45=$65, so you save around $5 by getting it as a package deal AND you get the sweet carrying case!

So, you sprung for the Ultimate Starter Pack, but you want more...more Booster Packs, more foils, more Spell, Gear, and Relic cards...what is a Portal Master to do?  Well, you could spring for the "Master Box" that consists of 36 Booster Packs!

Simple math of $5x36=$180 so you're saving about $10 right off the bat...and building a ridiculous collection to slaughter your opponents and trade for more!

I have to say, I love the packaging!  It is simple, sleek, and enticing.  The prices really aren't that bad either given the fact that the game is free and any add-ons are optional.  I think this hits a nice niche in the Skylanders community that ties in a new game mode that will expose young players and other series veterans to the card based battling games that are quite popular and catchy AND allow those with zero interest in the card game side to collect something else that is easy to display.

Unlike some YouTube personalities, I work a day job totally unrelated to gaming...and this is the busy season.  As such, I have yet to play the game.  I'm seriously typing out this review at 2:15 AM...for me it is more a labor of love than anything.  I will, however, say that I am very excited to give Battlecast a go!  I have never really played the online card battling games and always wanted to see what the buzz was about...this makes that very easy.

Hopes for the Future of Battlecast

I know, it just came out...and I haven't played it...or unboxed anything, but I feel my sentiments will be shared by the hardcore Skylander fans.

First off, and this might be more of a personal desire...I really wish Battlecast was on console and PC, especially PC.  I would love to play it with keyboard and mouse and would not at all mind entering a code, or scanning a card in thru a Portal, or other alternate means.  I get the target audience and the desire to have something mobile, but I'm a bit old school and think that Battlecast on the monitor I'm working from right now would be killer.
Plus, I have no space on my iPad for Battlecast right now...and I will have to update the software.  I will reference this that I am far more of an Android person, but I my tablet is an iPad.  The easiest remedy here would be if Apple wasn't bent on proprietary grounds and would allow for expandable storage.  Case in point, if I had an Android tablet I'd be streaming Battlecast right now.  My phone is maxed out as well, but my reason for not installing there is that I have a new S7 sitting in the box...it has been there like 3 weeks now...as mentioned, work is busy.  The other side of the phone vs tablet is that I have big hands and prefer a tablet, although a smart phone will be ideal for younger hands.

Keep in mind, I've yet to open the cards, or play the game, but as I understand it from the Battlecast website there are 24 Skylanders available.  I would really like to see the full roster (past, present, and future games) brought in...even if it is slowly.  An expansion here and there would be awesome and keep the buzz rolling...These updates can also be strategically positioned to help Portal Masters deal with the infamous summer lull between completing last fall's game and waiting for the next main installment.

This ties in with the roster expansion, but I feel like a steady stream of updates, even if they are just simple bug fixes, or the like would go a long way towards making the player base feel well taken care of...Small things like throwing in a 4th of July themed battle, or loading message is a nice touch.

Including Cards with Skylanders

This kind of boggled my mind a bit with SuperChagers.  The Starter Packs had Spitfire and Stealth Elf cards...nothing else.  If you bought Smash Hit, no card.  Sky Race Action pack, no card.  And it wasn't just no Battlecast card, but rather no stat card like fans grew accustomed to...

Again, maybe it is more my audience of hardcore players and collectors, but this was a big disappointment...to have a staple, and something people archived in binders and made their own card games to utilize was disheartening.

My hope moving forward is that new Skylanders (ie Single Pack Air Element New Character for Skylanders 6) have cards back...but as Battlecast Cards!  This just makes sense.  Players get their beloved card back with the figure AND have more incentive to download Battlecast and give it a go...You could even put the old fashioned stats on the Battlecast Cards.  It is, in my opinion, a practical choice to further advance Battlecast and satisfy veterans of the series and collectors.

I am VERY excited to open the cards up and play Skylanders Battlecast!  Any videos I do will likely be streamed on Twitch and then exported over to YouTube.  It is my way of getting around having to render out a recording from the iPad...those file sizes are MASSIVE.  Plus, this will let y'all check the game out, see it first hand, provide real time feedback, and to be honest...games like Hearthstone just seem better when they are streamed...I hope Battlecast takes off and becomes a year round staple for the franchise...stay tuned for more coverage!