Late last week I got access to some BRAND NEW, NEVER BEFORE SEEN Skylanders Swap Force content!  This ranged from a quick Swap Force Fact Sheet (copied at the bottom), to brand new screen shots, all the way up to a 4 minute or so clip of never before seen gameplay!

As of Noon CST Monday, July 29th, 2013, you should be seeing this!  We got some great shots of Free Ranger, Magna Charge, Night Shift, and Rattle Shake (in various different formats).

Then, the folks at Activision treated us to some brand new gameplay footage.  If you scroll down below you can see the stand alone pictures as well as some of my thoughts on things...I'll end off with the attached Skylander Swap Force fact sheet straight from Activison.  Here is the video:

Leave a comment to let me know what you thought about this reveal.  What character looked the best?  Which powers caught your eye?  How do you feel about the voice acting, characters in general, and enemies?  How about the graphics....can you tell how much better they are?


We start off with Fryno ("Crash and Burn") a brand new, Fire Element Skylander.  He is shown taking down a few enemies with bralwer punches (36) and a hot rod dash (40).

Free Ranger ("Whip up a Storm") an Air Element Swap Force character then came into view and took out several enemies with some powers ranging from punches (45), some sort of finishing move (78), a projectile lightning bolt (13), and then some sort of a tornado like move that not only damaged the enemy (20), but disoriented AND moved him!

Hoot Loop ("Let's Ruffle Some Feathers") a Magic Element Swap Force Skylander then appeared (briefly) and cast some attack that dealt damage (24) and then seemed to chain off into three separate and smaller attacks (8).  The main feature shown was his teleport ability...It served very well to help eliminate the enemies.  If you look close, you will see a Gillman right as Hoot Loop appears and walks forward.  You will also notice that the area is called "Gobblepod Sanctuary."

The next feature went to Rattle Shake ("Go Ahead, Snake My Day") one of the Undead Element Swap Force Skylanders.  He is shown winning a Swap Force Zone challenge that had him use the bouncing ability to pop 3 Kaos Balloons.  This kind of reminded me of the structure of "elemental zones" found in the 3DS version of SSA.

We then saw a combo of Free Ranger and Rattle Shake in the form of...Free Shake!  This is, of course, Free Ranger's top end with Rattle Shake's bottom.  The voice and powers (ie base, secondary, tertiary, and upgraded attacks) all remain Free Ranger...What changes is the bottom half and the subsequent ability.  With "Shake" down below, Free Ranger transforms into Free Shake and can utilize the bouncing ability of Rattle Shake to gather some loot and clear an area.  We also hear one of his lines "For my nest egg!"

The next feature went back to a new, non-Swap Force Skylander in the Undead Element's Roller Brawl.  She looked pretty impressive!  She was against a tough enemy and used her roller skating to circle and speed around an enemy (think Ghost Roaster's Skull Master, or Cynder's Dash).  Once the enemy dropped his guard, she unloaded with a melee of hits, the first dealing 51 damage and subsequent blows landing 34-44.  We then saw her seemingly roll her roller skates, which are a lot like blade gears, toward the enemy...after taking care of all the enemies she used the line "Down and Derby."

Our last highlight came in the form of Swap Force Skylander Freeze Blade.  Actually, the first we saw of him he was Freeze Zone.  Freeze utilized Blast Zone's lower half to blast quickly down a path and to an enemey platform.  It was soon after used to blast thru an enemy on the platform, lol.

The next cut scene brought us to full on Freeze Blade and another Swap Force Zone...This time, it was the speed (?) zone and Freeze Blade was racing against the clock to get to the finish line.  This was eerily similar to what I remember as a kid with Sonic 3 and Sonic & Knuckles as I attempted to attain Chaos Emeralds.

And that was that...all too soon the video came to an end.  That said, we saw a lot of cool stuff, got a feel for some of the character's personalities and powers, and saw a few more enemies and game locations.  If you pay careful attention you will see some Elemental Gates and other Swap Force Zones around the areas in the clips. 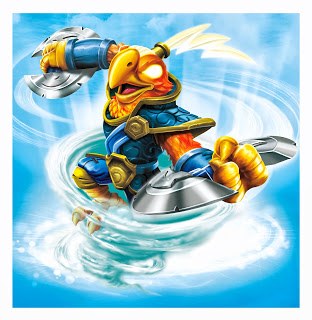 
PRODUCT DESCRIPTION:
Skylanders is “mixing it up” with the newest game in the award-winning, top-selling franchise.   Skylanders SWAP Force builds upon the success of the franchise’s signature gameplay and collectible toy experience, adding an all-new dimension to the “toys to life” innovation.  The game introduces a compelling play pattern -- dynamic swapability -- that lets gamers transform 16 SWAP Force inter-action figures into more than 250 unique characters by swapping the top and bottom halves of the toys.  Now, Portal Masters can mix and match characters’ powers and moves and experience an unprecedented level of choice than ever before seen in a Skylanders game.   Fans also can play Skylanders SWAP Force with their entire collection of 100+ characters from Skylanders Spyro’s Adventure ® and Skylanders GiantsTM .

Skylanders SWAP Force features new abilities – such as flying, climbing, digging, bouncing, or teleporting – which can be used in previously unexplored areas of Skylands centered on these play mechanics.  Additionally, the game features 16 new core characters, eight new LightCore™ characters and 16 new versions of fan favorite Skylanders from previous games.  Now kids will have more than 100 characters from which to choose. The game’s high-resolution graphics brings detailed characters and richer environments to life, immersing players in the game like never before.

In Skylanders SWAP Force , Portal Masters embark on an all new adventure in the mysterious Cloudbreak Islands, home to a mystical volcano that erupts every hundred years to replenish the magic in Skylands.  During an epic battle, a brave group of Skylanders were caught in the volcano’s eruption, which blasted them apart and sent them to earth.  But, the magic of the volcano gave these heroes a remarkable new power -- the ability to swap halves – turning them into a special team known as the SWAP Force.  Meanwhile, Kaos is back with a new evil plan.  And now, Portal Masters everywhere must reassemble the SWAP Force -- in their original form or in new combinations -- and send them back to Cloudbreak to save Skylands!

KEY FEATURES:
o   Vast Possibilities for Play – Skylanders SWAP Force features 16 new SWAP Force inter-action figures with new powers and a fresh play pattern – dynamic swapability – that lets kids create more than 250 unique character combinations, giving them more choice than ever before over how they fight and move in the game.  With each new addition to their Skylanders SWAP Force collection, Portal Masters unlock an exciting world of possibilities.