What?  Skylanders SWAP Force Starter Pack for Xbox One
Where Did You Get It?  Special Delivery
What Does It Cost?  $74.99 lus tax, currently on sale for $59.99!!
What Was Stock Like?  Well stocked everywhere
What is Included?  Xbox One Game Disc, Wired Portal of Power, Collector's Poster, Wash Buckler, Blast Zone, and Ninja Stealth Elf all with Stat Cards and Sticker Sheets


This isn't quite as detail oriented for me, particularly regarding the characters...That said, if you want details, check out the Wii U Starter Pack unboxing.

So, you are probably asking, why pick up another Starter Pack?  I picked up a XB1 to play a few titles that skip Nintendo and some that are Microsoft exclusives that my Nephew and I will enjoy.  Obviously, this SP will allow me to play the game on a different console.  Why do that?  Simple...

Second, when I complete most everything on the Wii U, I will come in and record Nightmare Mode on the XB1 which will let you compare and contrast the game, graphics, and more across two systems.

I am looking forward to playing the game and getting the bonus of utilizing the characters not featured as prominently in the blind playthrough.  This means I can continue to use Scorp, Riptdie, and Countdown in the blind playthrough, but come upgrade time Knockout Terrafin, Anchors Away Gill Grunt, and Big Bang Trigger Happy will be levelled up, have cash for upgrades, and be more ready to take on Nightmare mode with their Newlander counterparts.

I have never owned an Xbox and SWAP Force is my first XB1 game, actually arriving BEFORE the actual console :D

Don't forget, you can currently catch all STARTER PACKS on sale at retailers like Toys'R'Us and GameStop, anywhere from $15-$20 off...It is a great chance to land that second Blast Zone and Wash Buckler if you missed out on the Dark Edition Starter Pack. 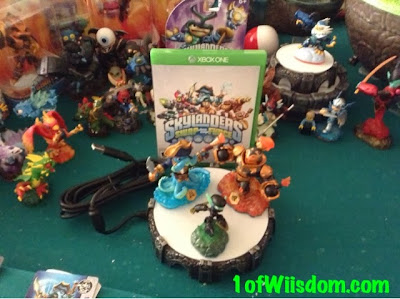