If you haven't heard, a few folks have been spotting some Skylanders SWAP Force Wave 3 Swappers, most notably at Target.  I have had 2 readers/viewers contact me on this and there has been another documented sighting.  We've also got Aussies landing Sheep Wreck Island AP and Arkeyan Crossbow BP.  Things are looking up for the holiday season...

The big draw, of course, is Stink Bomb since he will be the first access we have to all the Stealth Zones in the game.

Personally, I am the most interested in Rubble Rouser.

While checking around online, I found some buried links a few of you may be interested in...

We will get started with what Target dubs Double Packs C and D.  They retail for $27.99 plus tax and leave us wondering what exactly is defined as Double Pack A and Double Pack B, although there is a good chance that may very well have been the Nitro Magna Charge + Free Ranger and Nitro Magna Charge + Rattle Shake Double Packs that were available at launch and continue to be heavily sought after.  Note that their site lists both of these Double Packs as Target Exclusives.  From what I remember, a few folks across the pond said these had been available in the UK, I believe at Argos?  I've yet to see either Double Pack here, but will keep my eyes out...I'll try to head to Target tonight.

Triple Packs 3 and 4 aren't exactly new and don't feature Wave 3 Skylanders, but I have had a lot of people continue to ask about them...As with Giants, it is likely going to be really hard to find these Triple Packs.  They do exist and in theory should be on shelves, but the desire is for folks to purchase Single Packs.  There are still several Giants Triple Packs I have barely seen...and that includes the lull over the summer and prior to SWAP Force's launch.

These both retail for $24.99 plus tax...If you are trying to save a few bucks and are willing to dedicate the time to make it happen, this is what you want to look for...

On more of the Wave 3 note, folks in Australia and the UK have sent me word that they have been able to find both Sheep Wreck Island AP and the Arkeyan Crossbow Battle Pack.

I know Amazon.co.uk has the Arkeyan Crossbow, but to keep things simple I went to the land down under for these links: 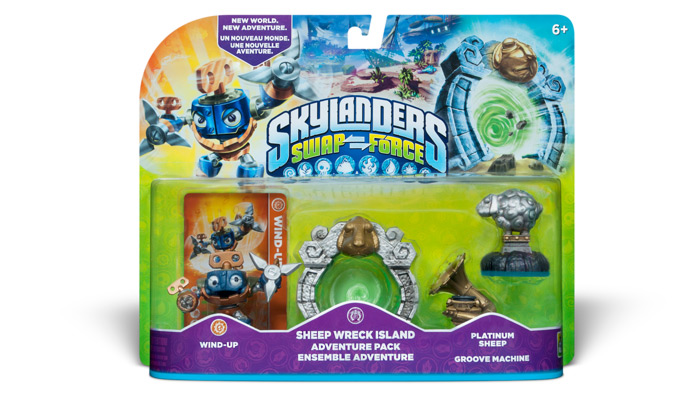 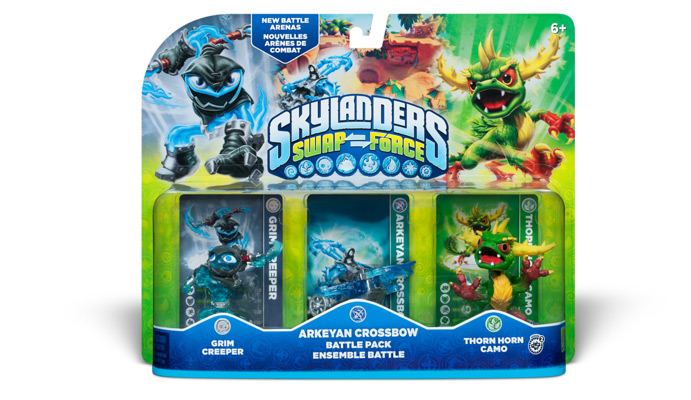 This gives you a good idea of what to look for in Wave 3...which will hopefully be out in full force here in the US very soon.

Sheep Wreck Island's AP will gives us a new level to explore, the Platinum Sheep and of course the vial Groove Machine.  The biggest draw will no doubt be Wind-Up who several readers have continued to express major interest in obtaining (along with Dune Bug).

The Arkeyan Crossbow actually looks really, really cool...Assuming it lights up, I think it will be super slick!  Thorn Horn Camo will be making his much anticipated return and fans can finally advance him to Wow Pow status.  Grim Creeper has established a big fan base with his LC and L-LC pose, but ghouls will now get to enjoy his standard pose.

We still have a few singles to look for as well.  That said, with the West Coast sightings happening here in the US and Australia already having both the AP and BP, things are lining up that we could "wind up" with W3 before Christmas.  The only issue is with just 2 weeks left, any stock coming in will likely get gobbled up by shoppers and scalpers very quickly.  Be on the lookout and stay diligent!

If any of you make epic finds be sure to let me know!

I'll update this post as time allows and as needed.  Good luck!!