It was another busy week, but not without some cool announcements...Let's get started with the run down and go from there.

I was out-of-town, but got to post the Round 2 Results and Round 3 Matchup Videos.  As of right now there are 7 days left to vote in Round 3 (Elite Eight).  Each contest has over 150 votes at this point, but the matches are not as close as they have been in the past...granted, that can change (especially with a week left).  The vote margins run from 24-57 at the time of typing this post out.  You can vote in the polls by scrolling down this page, finding the Twitter Feed, and then the polls will be right below.

You can also keep up with all the developments here:
http://www.1ofwiisdom.blogspot.com/2012/06/skylanders-battle-tournament.html

Well, with being out-of-town one should have the chance to get more and unique Street Pass Tags....If you follow the blog you know I hardly ever do.  This past weekend I did get 2, but neither registered for Find Mii or Puzzle Swap??  I'm not sure what the deal is there, but I at least got 2 new tags in Mario Tennis Open and got to bump the win streak up 2 matches!  One opponent was fully equipped and the other was just in casual Mii trim.  I'm not sure how I didn't get to use them for Find Mii/Puzzle Swap, but oh well.

Thanks to these two...whoever you may be, lol: 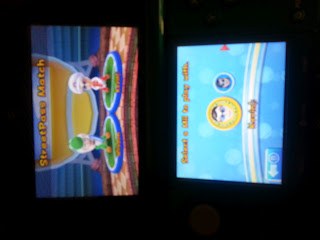 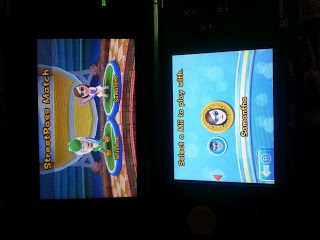 IF I'd have had genuine Street Pass tags, I'd have taken the time to rotate the photos...I snapped them at like  6 AM in the hotel room so work with me, lol.

I have actually progressed quite nicely on this one...thanks in large part to using Play Coins.  I am in the first level of the castle and was able to breeze through the Pink Slime right before that and got a sweet "Critical Hit" that finished off the otherwise tough Granite Golem with one swing.

August 19th is coming up really quick and that is the day you can get your hands on the 3DS XL and New Super Mario Bros. 2.  I'd really like an XL, but with my Aqua Blue 3DS in hand I can't really justify getting a new one at this point...Although that would allow me instant Street Pass Tags anytime I had both on...that might be worth it, lol.

If you pick up New Super Mario Bros. 2 in stores and register it, you can get 50 Coins in Club Nintendo.  Since this is the first, in a likely long line of future releases, that you can "download" from the eShop, Nintendo has put a 100 Coin bounty on the title to encourage that action.

I'm sure this is to test the waters and see how it stacks up with the mobile market, but I am one who simply likes to have the concrete product in my hand.  My only reason to buy from the eShop in this case is to get the extra coinage...tempting, but not enough to sway from my preferred medium.  If you plan to get the game, be sure to say so in Club Nintendo for bonus coins.

Speaking of Club Nintendo...Today (August 6th, 2012) is the last day to get your Gold or Platinum Gift.  I'm  Platinum and was torn between the cards and poster set.  In all honesty I would like the calendar more, but it is not a full wall calendar...Plus Gold can get it.  Majora's Mask was very, very tempting...but, in the end I went for the cards.  I figure most will do the posters, making the cards that much more "unique."  I like the posters, but I see the cards being easier to display.  I put my order in tonight...As usual, December 20th or so was the estimated date.  Keep in mind if you go with a game, it is available IMMEDIATELY.

And in yet another segway, I also just sent out my first two Skylander Sidekick Offers.  I went for Terrabite and Trigger Snappy.  I'm not sure if I'll go for the remaning 2 or not...It isn't  a horrible deal, but I'm also not big on the hassle of buying something I ordinarily don't (the bigger the bag of chips, the bigger the savings) and I'm mainly just not a fan of their insanely vague offering system.  For all I know, both offers I sent in will return a Gill Runt.  If things were nailed down I'd have probably sent in 4 forms.  As is, I'm fine waiting and seeing what happens.

I am still working to get all the main Skylanders (37), fully upgraded and through all 32 Heroics...I'm not in any hurry...I like to use it as a change of pace and to stay fresh with "Skylands" at this point.

We really haven't had any big developments...aside from this one.

Earlier this week, GameStop announced that they had teamed up with Activision for an Exclusive "Battle Pack."  This turned out to be the Golden Dragonfire Cannon Battle Pack.  It consists of: Series 2 Reposed Chop Chop, the Golden Dragonfire Cannon, and Shroomboom.  It is up for pre-order right now at the price of $24.99.  As best I know, this will only unlock a new battle arena...it is not an adventure pack as some have reported.  I would really like it to be, especially at that price, but it looks like it just unlocks an arena.  Hopefully the Dragonfire Cannon will serve a unique role in the course of the game to make up for not being an actual level/chapter.


This first shot was at Target.  They don't have much, especially compared to all the "out-of-town" Targets I have been to recently.  That said, I posted this for a reason.  This is the very first time I have seen Dragon's Peak at this store!  It is also the first time I have seen Lightning Rod, Zook, and Warnado (all in singles) at my local Target.  The rest of the line up was: Dark Light Crypt, Empire of Ice, Chop Chop, Eruptor, Flameslinger, Wrecking Ball, and Boomer.  The lone Triple Pack was Drobot, Flameslinger, and Stump Smash.

I also want to point out that I went back to the store 2 nights later...All that was left was Dark Light Crypt! 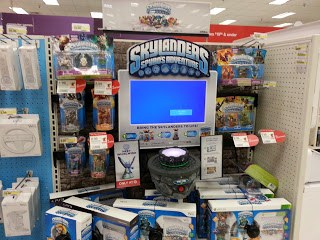 Next up is a local store that has a better stock...Pretty much everything but the Adventure Packs and Wham-Shell. 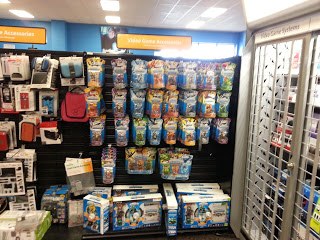 I had a few people ask me why  I still look at Skylanders when I have the complete set.  First, it is kind of a habit at this point.  Second, I like to keep tabs for myself and others as many still don't have the complete set.  Lastly, you never know when a new variant will spring up, or when you might land an already known variant...Just this past week I've seen 2 people get Crystal Stealth Elf...Most people gave up on that and Glow-in-the-Darks weeks ago...It is unlikely, but not impossible...I like the odds!

I just edited a few more Mario Kart Wii videos...I should upload one or two later tonight as a matter of fact. That said, I am obviously working on editing up through Part 16 which were all recorded over 2 months ago!

Once Part 8 of MKW is uploaded I will spring Mystery Game 1 in the mix...I'm just doing a quick playthrough on it..nothing major, but I think it is a fun game that doesn't get much love.

We still have the initial Skylanders Battle Tournament going and I have plenty lined up for later on...

The goal here is to finish recording Mario Kart Wii and "Mystery Game 1."  Around the time that happens I'll kind of go into what "Mystery Game 2" is, what happened, and what people want to see...I've actually recorded the update video covering that...just need to upload it.

As for the 3DS end of things...I am working towards unlocking all the items in Mario Tennis Open...I just lack 25 at this point, although it is seemingly taking forever.  I really want to get Professor Layton and the Curious Village wrapped up ASAP.  I'd like to have an open slot for New Super Mario Bros. 2 and some other things.

Well, that does it for this week.  I should have some new videos going up this week and I am really hoping to get back to recording...The main thing is to have Mario Kart Wii and  "Mystery Game 1" wrapped up and uploaded by the time Giants comes out.  Obviously, the sooner they get done, the sooner I can move on to something else before Giants...However much of a time window I've got will kind of dictate what I decide to record before hand.

I will hope for a regular (Thursday/Friday) update for this week and might have some more news to spring then, or very shortly there after.

Well, hope you enjoyed the post and stay tuned for some big udpates.  Also make sure to vote in the Skylanders Battle Tournament!  It is just 2 months and 15 days until Giants!!