First off, let me say I don't know if that is used by anyone else on Twitter, but I plan to start making use of it...Sadly in my #streetpassing attempts tonight I came up empty.  I could really use a light blue shirted Mii right now.  I guess I"ll keep trying until other people realize they need to drive the streets with their 3DS in sleep mode to land some Street Pass Tags.

Well, there was no pleasant surprise here.  I clicked on the Nintendo Channel to find some new vids on Mario Tennis Open and nothing from Nintendo Week.  I really enjoyed the show and think they would be wise to bring it back in some form, perhaps how I mentioned it in last week's update post.

First stop was Target...they had a lot of the same ol' stuff: Eruptor, Boomer, Wrecking Ball, Stealth Elf, Drobot etc.  Nothing new at all.

Toys'R'Us on the other hand...they were once more well stocked.  I saw every Triple Pack with the exception of the newest one (Lightning Rod/Cynder/Zook).

There were still more Legendary Trigger Happy singles than anyone knows what to do with and I'm sure the back is overflowing with them as well.

The real kicker here was the Adventure Packs.  They had ALL ADVENTURE PACKS IN STOCK.  This marked the very first time I had seen Empire of Ice at Toys'R'Us and the second time I have seen it locally (the first being last week when GameStop just had a shipment...with one of them): 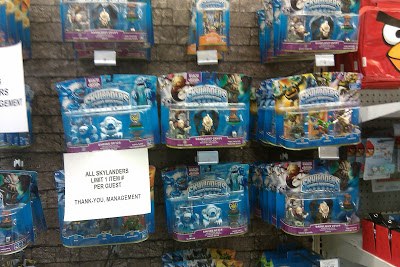 And keep in mind, this is right after I ordered Empire of Ice for my friend 2 weekends ago AND got Dragon's Peak from TRU online 3/25, with it arriving on Monday.  However, there were 3 Dragon's Peaks in the store.  They are still not really getting to cash in on the "exclusive window."  This was the first time I actually saw DP for sale and not being held for someone etc.

As I talked with an employee I learned that I did get pretty lucky with that "Blue Bash raincheck."  Keep in mind my store got 12 of them last Sunday (some stores had 6, most had 12, a few reported 18, and some of you with employees holding stock back for themselves would have seen numbers not divisible by 6).  What I learned was that my store was allowed to issue 15 rainchecks.  That would total 27 Blue Bashes allocated to our store.  I don't know if that would be nation wide (US), or applicable based on sales/population numbers etc, but it is what it is.  That makes me feel pretty lucky getting the raincheck, although I still have no guarantee the figure will get produced, lol.

Walmart had Drobot, Eruptor, a stashed Boomer, and maybe a few Wrecking Balls.

GameStop wasv very well stocked with singles and Triples, basically Wave 2 and earlier.  I did see a few "used" figures in plastic bags hanging behind the counter...they were all Boomers...poor guy.  What do people have against a troll that has a penchant for blowing stuff up?

My local store that sometimes has Skylanders actually had the most I've ever seen...They had Chop Chop, Whirlwind, Double Trouble, Drill Sergeant, and an assortment of earlier characters: 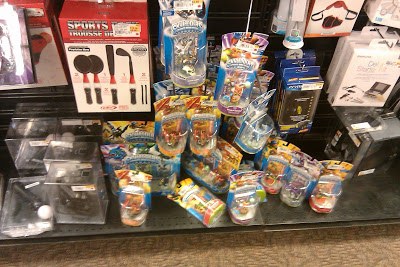 Now it is time for my awesome purchase...I shelled out around $30 to land this and I think it was well worth it: 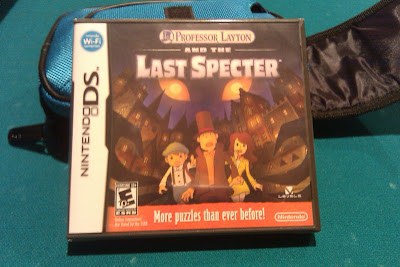 Yeah, Professor Layton and the Last Spectre.  Skylanders?  No, but I am looking forward to it.  This is the prequel to the series and I figured I would just get it first.  I like to go chronologically, but The Curious Village will be a pain to find and almost assuredly have to come used to avoid paying some crazy price for a game that should be $15 new, so I opted to just start here.  This should be the most refined game in the series, so if I like it I can hunt for Curious Village, if I don't, I can't just assume I can live without the others.

This isn't really something I'd typically see myself playing, but I like to change things up a bit.  I got Mystery Case Files: The Malgrave Incident for the same reason and really liked it, even thought it was a bit quirky and I had no freakin' clue what  I was supposed to do half the time (that putty knife serving as an ice scraper still gets me).

But for those who care, Unwound Future can be sourced pretty much anywhere for around $19 and I spotted the Diabolical Box for $15 at TRU.  This would be one of those, buy one get one half off deals that you could really score a sweet bargain on...

I think I'll enjoy the game, and I wanted to play tonight, but I am beat...I'm sure I'll get in bed and turn it on though.

Oh, and you remembered seeing "Scalpers: Case Solved" in the title and wondered where it was...well here you go.

As some of you know, Wave 5 is here...and no, this is not an April Fool's Joke.  Camo and Warnado (who I am looking forward to playing) have both been seen across the US and are of course making their way to ebay.

Wham-Shell has been spotted in Australia, along with a pretty sweet looking clear variant (I told folks they wouldn't be done with Blue Bash).

Anyway, one of the first ebay listings was in my town (see, I don't make up the ebay pirate stuff for the heck of it...it is true).  I first heard of the "lady and her friends" raiding GameStops every morning at opening...then at shipment times from a manager this fall.

It became such an issue at my local TRU that they imposed the "One per Customer" limits.

Walmart has not done anything and you can tell...note that it is the only place that I only seem to find Eruptor/Boomer/Drobot...you know, the ones that scalpers can't make much money on anymore.

Well, as I was talking with an employee at TRU I was told the story on our local limits.  A guy was coming in and cleaning the shelf, much like many of you have seen at Walmart.  He did this regularly AND he had a track record of doing it (how about 28 Wiis back when they were super popular and almost impossible to get a hold of locally).

One day the store employees and manager told him he couldn't buy it all, just one of each...he got mad and wrote a letter to corporate.  Corporate investigated and when they heard why they did it and saw the transaction history, they agreed with the local store and sent the guy a similar letter.

Well, guess where his wife works?  If you said Walmart, you are correct!

That means, that she opens the cases in the back...pulls what she wants, knows that the other stores stocking Skylanders will have the same shipment, sends someone over there, or has an associate hold them for her, and then she and her husband list everything on ebay to make a killing.

I've said before, if a store gets something in that an employee wants, I'm all for them holding it back and buying it.  If this lady was a huge fan, sure...take the first Camo and Warnado.  The thing is, she takes them all every time! If  Drobot would fetch more than $9 on ebay I know he wouldn't be on the shelf at Walmart.

And keep in mind right now it is Walmart that is the place getting the Wave 5 Skylanders.  So, where I run in and find Drobot, you might head in and find Camo and Warnado.  I'm not a huge Walmart fan and knowing that an ebay pirate works there, takes advantage of the system, and does it for huge profits from those afar and at the expense of local players, I'm pretty ticked.  Like I said, if they get 2 shipments a week and she is the "First" to get the new stuff, fine...enjoy it...I'd like some perk if I worked at Walmat too.  But to literally have this job just to advance your second, and probably more lucrative job, is pretty sad.

This is why I NEVER buy from scalpers and refuse to pay over retail for anything.

With that said, I know some of you face similar situations with your Walmart, Target, GameStop, or Toys'R'Us.  However, you can take solstice in my recent research findings.  GameStop.com has added the LRod/Cynder/Zook Triple Pack as well as Camo and Warnado to their website.  The "Add to Cart" buttons lit up today, but they come up as an error when you click them, nonetheless that means they will soon have the Wave 4 and 5 Skylanders up for grab:

Well, that wraps it up for this week.  If TRU shipped by UPS I would have the Lightning Rod Triple Pack today, but since they stick it with the post office I'll likely see it Monday.

Hope everyone has a great Easter...Keep your eyes out for the Wave 5 Skylanders!
Posted by 1ofWiisdom at 2:37 AM