What?  Mario Kart 8 for Nintendo Wii U
Where Did You Get It?  GameStop
What Did It Cost?  $59.99 Plus Tax
Promotions?  Free Mario Kart 8 Poster with Pre-Order
Promotion 2: Free Nintendo Game with the Registration of MK8 in Club Nintendo
What Was Stock Like?  Well Stocked!

I have waited a long time for this game!  I am a huge fan of the Mario Kart 8 Series and could not wait to get my hands on this title!  I picked up 2 copies, one for myself and one for my Nephew since it tied in perfectly with the last day of school (props to Nintendo for the Friday release!).

My Nephew and I logged a lot of time playing Mario Kart Wii and Mario Kart 7 together...In fact, it would be easy to say Mario Kart Wii is the reason I got into wanting to record gameplay footage.  Every night we raced there was some epic comeback or insane ending...We always finished with, "I wish we would have recorded that."  So, I started recording!

I was miffed we didn't get the free Blue Shell/Spiny Shell like Europe did, but Club Nintendo does offer a free game with the registration of Mario Kart 8.  These aren't bottom shelf, $5.99 games either...They are premo, Nintendo Titles!  The Legend of Zelda Wind Waker HD, Pikmin 3, Wii Party U, and New Super Mario Bros. U are the 4 titles you can choose from...I always encourage people to sign up and register their hardware and software with Club Nintendo for reasons just like this, not too mention the other cool prizes.  I am currently torn between Wind Waker HD and Pikmin 3...

The other thing that miffed me was the total lack of advanced notice on pre-order, or day of purchase bonuses...I waited a long time for announcements, or a potential blue shell equivalent here in the US and all that turned up was GameStop's poster.  As it turned out, Walmart and Target both had Wii Wheels going with the game...but I was unaware of those until the Sunday before release.  Toys'R'Us has the BOGO40%, which is great, provided there is another title you want to pick up.  That said, I went for the pre-order bonus glory in GameStop's Poster.

It isn't the flashiest thing, but it is neat and will look great hanging.  It measures 11" x 17" for those wanting to frame it...Although, since it is double-sided that will kill off one display angle.  I suppose though, most will have a favorite side and can mount it facing outwards.

The front side features a slash cut design with the Mario Kart 8 logo on one side and Mario in his anti-gravity kart on the other.  The dividing line is some race track advertisements. 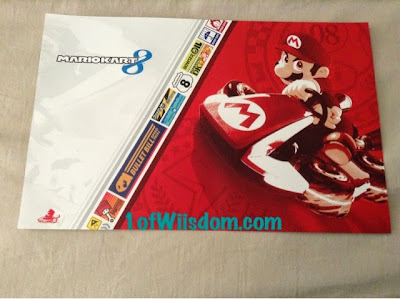 The back side features another slash cut styling with snapshots of several of the new tracks meshed with the load screen style art. 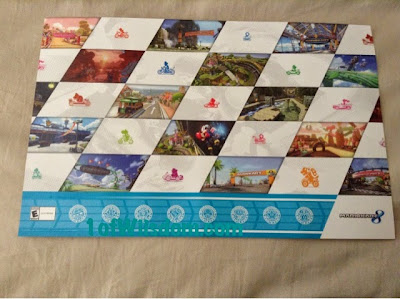 I personally would have preferred a very simple poster.  Perhaps a blown up version of the cover art itself on one side and the back side featuring all the track names, characters, and items.  I suppose I value information and a helpful snapshots a bit more than modern styled art, but to each his own.  It was free, it is Mario Kart related, and I really can't complain.  I do hope though that Club Nintendo will offer up a 2 or 3 Poster Set as I described: Cover Art, Tracks and Items, and Characters. 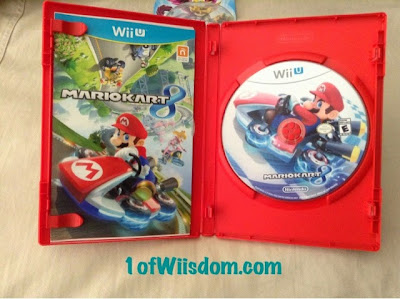 The game gets a special Red Case which is rare and cool, despite me personally being a fan of the standard Wii U Blue. 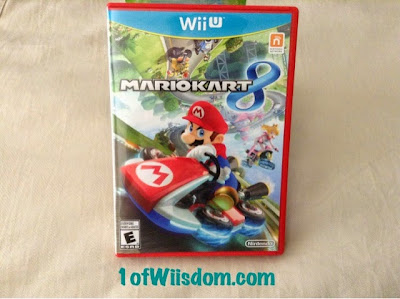 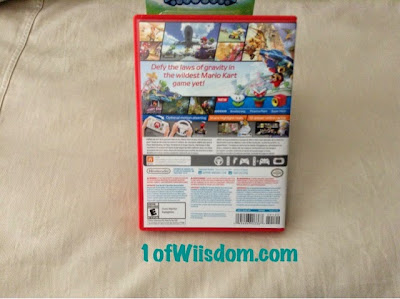 The instruction manual is basically 1 page and in full color, but lacks detail.  I still miss the old mega-thick, informative manuals of old.

That said, this game is great!  The hours of fun and infinite reply value make it a steal.  It will deliver solidly as a gift of any sort and will likely maintain a perch at the top of the charts as word continues to spread with peer influence.  Mario Kart 8, in my opinion, is an example of software that moves hardware.

If you don't own a Wii U, the Mario Kart 8 Wii U bundles is the way to go and a tremendous value.  You will not regret purchasing this game.

I have currently played about 3 hours of Multiplayer with my Nephew and logged another 2-3 in the solo Grand Prix.  The new tracks are outstanding!  The graphical prowess of the Wii U definitely impresses...the retro cups featuring tracks born on the Wii version (like Moo Moo Meadows) are stunningly different...you can pick up the feel, lines, and sounds...but graphically they are like night and day.  I never had issues with the graphics on Mario Kart Wii, but Mario Kart 8 absolutely blows it out of the water.

When you factor in the infinite replay of Mario Kart Wii, but now have new, never before played characters (The Koopalings) AND the customizable karts and bikes like in Mario Kart 7 on the 3DS, you have opened up the door for tons of options and the chance to literally squeeze every last .001 off your time trial records.  This feature will be very much appreciated by hard core players.

The online mode has a great, simple interface that will get you racing in no time.  You can hop on regionally, worldwide, with friends, or via tournament.  You can also set up private rooms etc. to keep the action close to home, or within your circle of friends.

I've yet to play Battle Mode, but my Nephew and I should do that tonight.

This game seems to me an improvement over Mario Kart Wii and that game has yet to get boring to me...I envision a full run from this game as well.  Hardcore players will love the new elements and characters to master while breaking records, and casual players will enjoy the pick-up-and-go play style that the series is known for....Mario Kart 8 can be your weekend retreat for a good time, or an obsession hunting quicker times and Tourney wins.

Regardless your age, skill level, or penchant for video games, Mario Kart 8 will entice everyone to get involved...even if it is just as a spectator.  There is so much built in to the visuals, it is a little overwhelming at times trying to take in the surroundings AND win the race.

This is truly a must own for any Wii U Owner, Mario Kart fan, or gamer in general.  If you don't have a Wii U, this is reason enough to get one!

Myself and my Nephew will be playing this one for years to come...Thanks to Nintendo for delivering up yet another first party smash hit!
Posted by 1ofWiisdom at 4:21 PM