I will be taking care of that tonight, hopefully as I will update you on the Skylanders Giants Playthrough, recap some polls, launch some new polls, and of course make sure you've seen the two posts on Skylanders Swap Force (one with basic info, and another with the character roster).

For the time being, how about you take a gander at the Walmart Exclusive Molten Hot Dog! 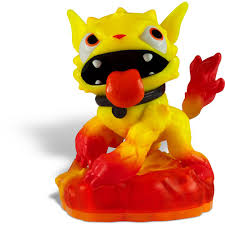 So, how do you like Molten Hot Dog?  The best news here is that this is a Walmart Exclusive.  While I am not a big fan of the chain (mainly bc they are always packed), it is a great thing because they are about the only chain that does a good job of keeping their variants on the shelf.  With that in mind, I do not think it will be tough to land Molten Hot Dog.

The other big perk to this set up is that unlike many had speculated (myself included) we will NOT have to buy a Scorpion Striker Battle Pack at Walmart to land Molten Hot Dog.  Presumably they should start having them after the GameStop window closes and simultaneously have the Molten Hot Dog Single Pack for those looking to add him to their collection, or for those who simply don't care for the battle pack and magic items etc.

This could change when I see him in person, but right now, I have to give my personal preference award to regular old Hot Dog...he just looks better in flame red...the yellow looks like he rolled around in mustard.  Nonetheless, I look forward to adding him to my collection to have both upgrade paths active at the same time!

Similarly, if you are a Molten Hot Dog fanatic, I spotted this on Amazon a few nights ago: 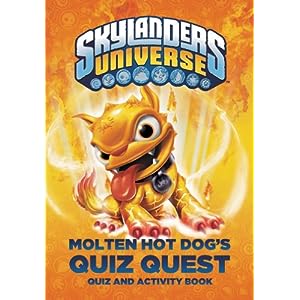 It will retail for $5.99, but shows to not ship until May.  The earlier Quiz Quest Books have not impressed me, but this might be worth looking into...Here is the link


Before we get too far away from Molten Hot Dog, I want to bring up the good chance that we see Jade Flashwing, Polar Whirlwind, and Scarlet Ninjini show up as other store exclusives....The most likely outlets being Target, GameStop, and yet again Walmart.  These are known, in-game variants AND distinct from others like Stone Zook, Sparkle Sprocket, etc.

I had long ago speculated we might have Triple Pack #9 be Molten Hot Dog, Jade Flashwing, and Polar Whirlwind...I guess that isn't as likely now, but it would have still been a nice gesture to fans from Activision IF it came with acknowledgment PRIOR to all the others being released in single pack form.

Before we get too wrapped up on an in-game variant, what about the "yet to be released" Skylanders?  Great question!  At this point no one really knows when Wave 4 will hit.  I would hope that we would see (finally) S2 Spyro, S2 Wrecking Ball, and S2 Drobot along with perhaps another LightCore release (Pop Fizz, Hex, etc).  We still need TRU to drop L-Chill.  I have to wonder if she won't be treated much like L-Trigger Happy.

Ninjini was given away at TRU in Times Square (yes I know, I don't live in New York either...and if I did I would be at work on a Tuesday).  There are all sort of ways to question what they did, why the did it, what they were thinking (if they were thinking), and how it doesn't cater more to scalpers than core fans, and in particular children (how many 8 year olds get to hop in their Civic or hail a taxi and stand outside of TRU in Times Square for 4 hours in the cold while missing Math, History, and Science class?  But I digress...).

Apparently, despite completely botching almost every BIG Skylanders event locally with 2-5 of each "new" and "highly demanded" figure, TRU and Activision stepped up with a LOT of Ninjini figures...most of which are now on ebay for 10x retail.

Again though, regardless of how stupid the timing was, it was a decent gesture and a nice way to kick off the announcement of Skylanders Swap Force and more importantly, their presence at the Toy Fair.

And by the way, this year's Toy Fair Exclusive is a wicked-cool looking Chop Chop that I am dubbing "Metallic Blue."  If Activision wants to send one my way, I will gladly accept it and introduce it!  These are hard to find and will likely wind up going on ebay for crazy prices.  The Toy Fair is kind of an "insider" trade show, so unless you are in the business you kind of don't get access to it.  It would be nice if a few of them were kicked around to the core fan base, but oh well.  They really did a nice job on this one imo:

Please note that I usually like to give credit for "non-stock" or readily available photos, but this came from the first link of images...an ebay sale.  Where there are a TON more of these things...it makes you wonder if anyone that got one actually appreciates them and keeps them for their own collection, kids, or even just display at their store.  I'd give $10 for one, but not $150+

I covered this one in great detail on Tuesday night.  I have what I believe to be as much info as possible including a post with general info and my personal thoughts as well as a stand alone post on the character roster.  You can find both of them here:

I was just on Amazon checking around on some things and if you have not gotten Thumpback or Eye Brawl, it looks like you can order both right now as they will be in stock on February 11th.  Also of note is that GameStop has had them very regularly now (online).  You should be able to land them much easier now than just a few weeks ago.  That said, I've still never seen them in stores aside from when I got them.

Also in-stock right now on Amazon and GameStop is Light Core Shroomboom!  I saw him for the first time in person tonight at Target.  It looked like they had just gotten a shipment of LC Shroomboom and Jet-Vac, as well as the others with their new "I Light Up" stickers.

There was still no signs of popular characters like: Slam Bam, Terrafin, Fright Rider, Chill etc.  I was checking for Cassie and Flameslinger is among those missing in action as of late.

My local Target FINALLY had Giants again (still no Granite Crusher...I truly think I got the last two they had and have had on launch day).  It was of course Swarm, Bouncer, and Crusher.

The only S2 from Wave 3 that seems to be easy to find is Cynder...that is kind of to be expected with most people getting the Starter Pack instead of the Portal Owner's Pack.

The most common in my area remains Sprocket...she is like the Boomer of Giants it seems...just doesn't sell that well.  Stump Smash was around and a very small number of single Pop Fizz characters were present....I would almost swear that the blue is darker than the one I got in a Triple Pack, kind of like what we saw with Stump Smash last time.  At another local store the most common is Drill Sergeant, which oddly enough, is never present at Target...go figure.

Well, I had planned to upload videos tonight, that isn't happening...these videos have been ready for a LONG TIME.  I think where we left off I am ready to upload Chapter 13 "The Oracle."  As you may have guessed, this one will consist of several parts.

Past that I have up through Chapter 15 edited and ready to go...

Following those chapters will be the Intro and Heroics on Thumpback and Eye Brawl etc.

The big news of the night in regards to the playthrough is what happened last night.  Finally, ALL of the GIANTS and NEWLANDERS are ready to battle Kaos!  They are still 100% box stock in terms of upgrades, BUT I have them done with all of the Speed and "tough" (ie Drobot, Double Trouble, and Zap) Heroic Challenges.

The next time I record it will probably be the final chapter and battle vs Kaos.

That said, after wrapping up the key heroics last night, I went thru Chapter 8 in my "Hard" file.  I got some key things done...First off, the part with the fiery furnace allows you go go in and back out over-and-over, which allows Hot Dog to complete his top tier quest of chasing birds away.

Speaking of birds, I replayed the level 2 additional times to get Jet-Vac's top tier quest taken care of with all three figures (Jet-Vac, Legendary Jet-Vac, and LC Jet-Vac).

I plan to eventually make a new blog post covering quests and offering tips etc.  Stay tuned for that.

Auto Audio (In the Car): Gary Allan "Set You Free"
Home Audio (At the House): Theory of a Deadman, Sixpence None the Richer, Gary Allan

It got way later than I had intended for it to get before wring this, but I suppose that is how things go for me...

That said, as soon as I get some free time I'll start the next batch of vids (Ch 13, 14, and 15) uploading.  I also hope to record the final battle vs Kaos very soon.  The plan is to do it multiple times (ie box-stock Newlanders, box-stock Giants, castaways (because I like so many of them), and then repeating with upgraded Newlanders and upgraded Giants).  And fear not, I havent forgotten about the Adventure Packs...it is just so nice to do things numerically in-order I am going to take them on AFTER Kaos.

I will have new polls up this weekend!

Well, I hope everyone has had good luck landing Thumpback and Eye Brawl.  Similarly, if you haven't already checked out my blog posts on Skylanders Swap Force, please do so!  I am off to Kaos' Castle!