Darksiders II is a game that I was thrilled to see announced for the Wii U launch.  It looks like a more gory Legend of Zelda game combined with a huge open world concept.  The idea of playing as Death, one of the Four Horsemen, is an interesting take and one I am willing to explore.

I don't want to go into too much detail having never really done more than watch a few playthrough videos and trailers.

Some have reported frame rate issues, but past that I haven't seen many complaints.

I am not sure if I will do a playthrough or just enjoy this one on my own time.  It should be fun regardless.  When I asked if anyone wanted to see an unboxing, Darksiders II drew the most interest... 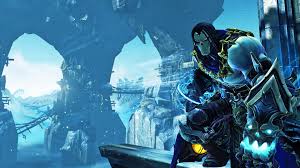