What?  Special Edition Gill Grunt (Series 2 Pose)
Where Did You Get It?  Toys'R'Us Promotion
What Did It Cost?  FREE via Promotion
What Was Stock Like? Limited, Have not seen him in Stores

I received my Special Edition Gill Grunt from Toys'R'Us today...It was shipped via a padded envelope from Toys'R'Us.  I got an e-mail January 17th with a code to redeem him via their launch window promotion.  You essentially just had to spend $100 on Skylanders SWAP Force merchandise between launch day and the close of the year to qualify.

The offer changed course several times and was postponed once or twice, but nonetheless, TRU delivered a special Gill Grunt.  The odd thing is that the Special Edition Gill Grunt figure in question here isn't Series 3 Anchors Away Gill Grunt, but rather Series 2 Gill Grunt.  Not a big deal, but it would have been nice to have things line up perfectly.

That said, I happen to like his Series 2 pose the best so I won't complain too much!

The coloring has been dubbed anything from green to green metallic, but I think I will stick with "Fishy Emerald" as I called it in the video :-) 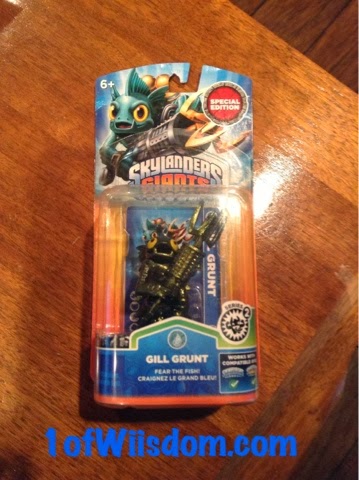 Fishy Emerald, or whatever you want to call it, actually fits Gill Grunt and this pose very, very well in my opinion.  I believe he will follow standard "chase" variant format where he will show up as a standard S2 Gill Grunt in the game, but likely at Level 5 with 2,000 or so Coins in the bank...I will verify this and you can see it in the SWAP Force Introduction videos.

I have heard of a few folks having trouble getting their claim heard by TRU, but they are honestly not that bad to work with...Keep trying, stay calm, and be polite...it will get you much farther than being irate.  If you truly qualified there should be no issue, eventually getting your SEGG.

That said, if you are a collector, operate on the "Keep one sealed and open another" methodology, or just need 2 for kids etc., TRU claims you can find them in stores and you can order them online.

For what it is worth, I have yet to see SE Gill Grunt in stores and no employees report seeing him, or being aware of his arrival.

I mention that first, because I have had numerous people get their SE Gillman just fine, but found that he arrived in poor shape thanks to the bubble mailer/padded envelope and delivery service, mostly the latter.  Mine came in relatively good condition aside from a slightly folded upper area...which I will take over dented plastic, or a loose figure.

Obviously, if SE GG hits store shelves, you can take your pick and get one in mint condition.  However, if that does not happen and you have to, or choose to order one in, my advice is to get several figures or triple packs.  Here is why: First off, when you spend $49 or more you get free freight.  Second, the additional figures, or Triple Pack, Adventure Pack, Battle Pack etc. will force your order to ship in a box.  I will caution that boxes are not fool proof, especially the cheap, thin ones, but they are more substantial than an individual padded envelope.

If you elect to order in a 2nd, or get your first SE Gill Grunt, here is the link: