What?  Quick Draw Rattle Shake, Undead Element, SWAP Force, Bounce, Alt-Deco
Where Did You Get It?  Frito-Lay Promotion
What Did It Cost?  Variety Pack with Code and a lot of Time

Well, for the 2nd day of 2014 it turned out to be a pretty good one.  Factoring into that was the arrival of Quick Draw Rattle Shake.  I was fortunate/lucky enough to win two of them and they both arrived safe-and-sound.

This promotion was very poorly run.  That is sad for the simple fact this isn't their first rode and they seemed to be making strides toward truly perfecting the setup.  That said, let's try to be positive and look at the pros.  The biggest one was just having the chips readily available...that has been a BIG ISSUE for myself and many of you...not being able to even find the specially marked bags (this is why I do not have Flocked Stump Smash...I never once saw a promo bag).  That said, having tons of the bags available is a bit of a downer when the codes to win are on the outside and seemed to stretch at least 10+ bags.  The first few days of the promo people had error messages that the code had been used etc.  Frito-Lay did address this quickly, but people were irate.  I got royally screwed in that I actually won on Day 1 or 2 of the promo and it never let me submit my info.  All that aside, I did actually win two and since they arrived (well packed in a fitting box) I can't complain too much.  I will end on the note that I hope they take what they have learned and go back to the Giants Sidekicks setup, or even Halloween Fright Rider...I'd also take something better. 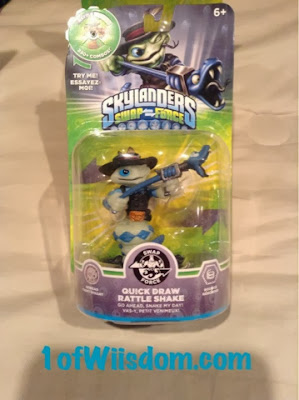 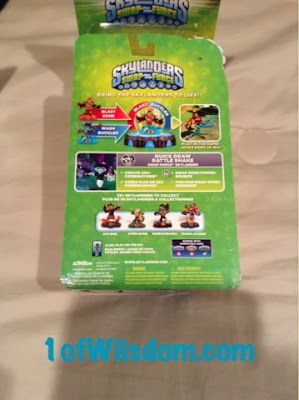 Now, before we go into the details...Quick Draw Rattle Shake is an actual in-game variant.  That means he registers in the collection and appears in the game just as he looks in the packaging (think along the lines of a Legendary or Dark Skylander).  This has angered a lot of fans and led to the majority of the backlash.  If this was just a chase variant I don't think the uproar would have been quite of the magnitude it was.

All of that aside, Quick Draw Rattle Shake looks really good in person!  He is basically a superbly well done GITD with blue diamonds and blue accents.  I tried to showcase the GITD aspect in the video and it didn't turn out too great, but if you have the chance check one out with the lights out...it looks very good!

This character is important for completionists and collectors alike.  My fear, and the biggest reason I despised the exposed game code, is that scalpers had instant access without so much as being forced to buy a $6 bag of chips.  Several reported seeing people rummaging thru the inventory and taking pics with their phone to enter the codes.  You were capped to 4 per house, but given the "in game variant" status of this figure I am afraid in-the-know scalpers will have cashed in and unleash these figures to a fan base desperate to attain a figure needed for the collection.

There is a chance we could see Quick Draw released late on like the Sidekicks and Gnary Tree Rex, but that is far from guaranteed and simply speculation at this point.

Personally, I would rather send in (x) UPCs from the chips and payment than jump thru the contest hoops etc.  I mentioned this in the videos, but if you say land some Wave 3 figures, you might have a window you could trade with fellow Portal Masters for their extra Quick Draws...this is mutually beneficial and starves the scalpers.

Still discounting the downside of the promotion...Quick Draw is a very well done alternate of Rattle Shake.  He looks great, the name is fitting, and he will look great in any collection.

If I do wind up opening one of the QDRS I will update this post.
Posted by 1ofWiisdom at 4:31 AM