What? Rubble Rouser, Earth Element, SWAP Force Skylander
Where Did You Get It? Target
What Did It Cost? $14.99 plus tax
What Was Stock Like? 2 in the back, in a locked case
What is Included? Rubble Rouser, Stat Card, and Sticker Sheet 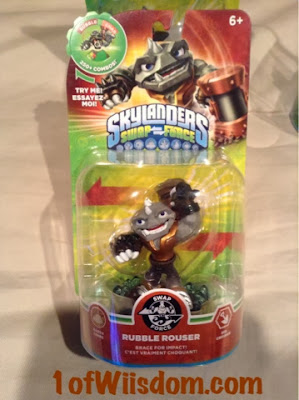 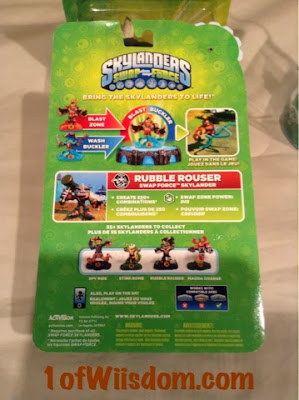 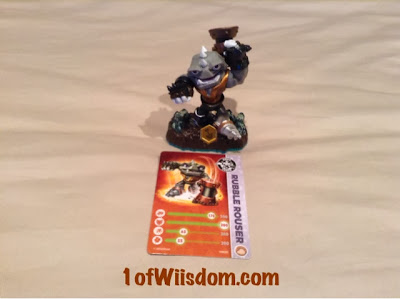 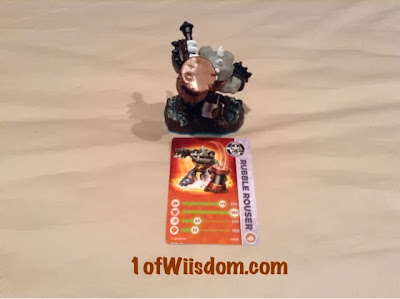 After entering Target and beelining to the Skylanders section, I wasn't shocked to see empty pegs and the lowest SWAP Force stock I've seen to date at the store.  I went in Sunday (the day of the ad 12/29) and then twice during the week...Each time there were no Swappers, and decreasing stock.  I asked employees each time I was in (as I always do when trying to find something new) and the response was and remained that there had been no new shipments since before Christmas and that they had nothing in the back...everything available was on the floor.

Well, the store was desolate (my favorite setting for shopping) and as I was leaving I saw an employee in electronics.  She was super nice and upon scanning a tag offered to check the back even though it said there weren't any.  She came out a few minutes later with an arm full of 4 Skylanders: Hoot Loop, Stink Bomb, and 2 Rubble Rousers.  I was kind of surprised there were no Spy Rise figures, but it is hard to argue with getting 2 of the 3.  I checked out with Stink Bomb and Rubble Rouser (although I now realize that the sale didn't ring up).  What I learned, and what may help you, is that my store had these in the back in a locked case.  This isn't like the case for games and high end electronics, this is literally in the back where you'd never have access to look.  When I got up front I figured it was odd I had a bag with stuff in it and told the story to the checker.  She said they had been having a lot of theft and it was a precaution.  I don't know if this is just a local solution, or something nationwide etc, but it is a new revolution to me...

There were no notes to ask for any characters you don't see and if not for the overly diligent and helpful employee I would have once again walked out with nothing, while the figures apparently sat trapped in a locked case.  The funny thing is a Target Exclusive Nitro Magna Charge and Free Ranger Double Pack were on the pegs...as well as a few Giants and some stray Sprockets and 1-2 Scorp figures.

I have to wonder if all of the W3 Swappers were in this case when I went in Sunday, and the other two days prior?!  I know most stores had these well in advance of the 12/29 ad because folks were buying them last Thursday and Friday.  It could just be a case of employees legitimately not knowing the characters were locked up, or just simply not caring to check as I assume this case also houses things like iPod, iPads, and extra stock on cameras etc.

That said, you now know the story behind how I got Stink Bomb and Rubble Rouser and for those of you still willing to deal with Target (I've had a ton of people tell me they were blowing them off due to not having stock etc), you might ask an employee to check the locked cases in the back.  Will it work?  It comes in at 50/50 odds, so I'd say go for it...

I have to say, if the figures were really there when I went in last Sunday it is pretty ridiculous and I likely could have landed Spy Rise as well.  This could also be great timing and maybe they showed up earlier today and made their way to the case.  Once more though, no signs to ask an associate, check with management, etc...just empty pegs.  My advice is give it a shot and if you still get the runaround, check back when you can or just hold out for a broader release.

All of that aside, I am stoked to finally have one of the Earth Element Swappers!  I'm kind of leaning towards Doom Stone based solely on character art, but I think Rubble Rouser is well done, has a good back story, and should be a nice asset to the game.  Plus, his card stats are really high. 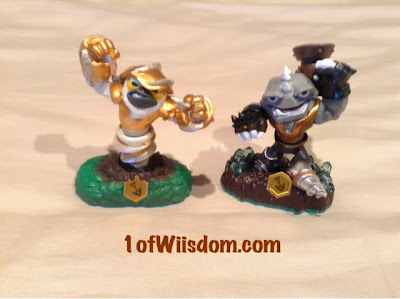