Once again keep in mind that I am in the US...that means what I post applies to the US.  I do not know how it goes down in other countries etc.  Although I do know several in Australia and a few in Western Europe have told me they've landed Dragon's Peak and some Wave 4...

Nonetheless, Toys'R'Us and their month long "exclusive" window to sell Dragon's Peak technically began today. I know some of you had stores that sold it on 3/21 and the fact of the matter is they shouldn't.  Think of it is Madden releasing nation wide...it almost always goes down on a Tuesday.  Any store that were to sell copies Sunday or Monday can get in some pretty serious trouble...So if you got it, your TRU is pretty negligent, lacks management that comprehends how things are supposed to be, and in all honesty the bottom line is you got very lucky.

Several of you HAD Dragon's Peak on 3/21 only to have it taken back or held when the store told you they couldn't sell (pretty big mistake, but at least they caught it).  Some of them handled it well by letting you put your name on it and promising to hold it for you on Sunday.

The rest of us just had to wait...

Well, I went in today and despite my hope that Dragon's Peak would be stocked deep on 8 pegs with boxes waiting in the back I came up empty.  I'm in a relatively small market so as opposed to thinking 250 people stormed thru purchasing Dragon's Peak, I'm just thinking they probably had like 20 of them.  When I asked an employee if they had any she seemed to think so, went over to the Skylanders section with me, and said she guesses they sold out.

Keep in mind my store enforces the 1 per customer AND they supposedly sold them on 3/21.  That means that since Wednesday they got in Dragon's Peak in a decent quantity.  That should suffice to support my theory that DP will be stocked in abundance.  I can not see TRU being dumb enough to not have mandated "X" units to satisfy demand for their exclusive window.  I mean once GameStop, Walmart, and Target all have it and are selling it for $5 less who is really going to beat down the doors at TRU to pay more?

I did see two Dragon's Peaks behind the counter with names on them...I have no idea how that works...If I could just call at opening and say "Hold me one" I would have...seems like if someone is there cash in hand, they should make the sale.

Sadly my store had NO other adventure packs, no legendary three packs, and in all honesty no triple packs (which basically made 80% of the sales circular pointless).  I had really hoped to walk in and find Wave 4 Triple Packs left over from people who opted for the Dragon's Peak AP...something just isn't adding up in that scenario.

What we did have was a lot of singles from the early characters: Drobot, Stump Smash, Prism Break, and then a few newcomers like Whirlwind and Drill Sergeant (which still ticks me off):

Also of note is the INSANE NUMBER of Legendary Trigger Happy packs in the store.  A brand new "aisle" display was stocked deep with them...it also looks like the bottom would hold triple packs or adventure packs: 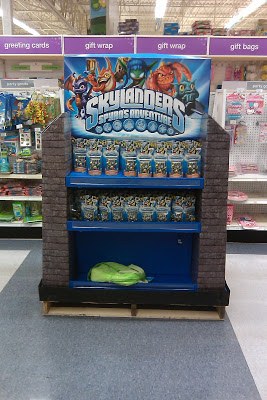 So, it looks like activision literally shipped a new display unit (just picture a box covering the display and stapled to the pallet), but can not make Empire of Ice, Lightning Rod, Zook, and even the 30 Day TRU Exclusive Dragon's Peak in large enough quantities to satisfy demand...way to go guys, keep the priorities in line!

The other thing noteworthy is that I have still NEVER SEEN Empire of Ice or Cynder single packs in any of my local stores, and you all know how often I look.  I really think Empire of Ice is the toughest AP to find.

The good news is I ordered Dragon's Peak online from TRU, they have the nuttiest estimated delivery date of 3/30-4/8.  So if I can't land it locally, there is one on the way...I felt like I had to do that as insurance over yet another blunder between Activision and TRU.  I am fine paying shipping (saves me time and fuel), and more importantly I won't be left with my only option being a scalper (which means I wouldn't have it...I'll never pay more than retail for anything like this).

I'm sure about the time I get it delivered I'll walk in and find 40 Dragon's Peak APs just sitting around, but such is life.

I'm really hoping to land Lightning Rod and would just assume do it via the Triple Pack.

Hope some of ya'll had a better time than I did.
Posted by 1ofWiisdom at 4:08 PM