One of the most popular requests I continually get on my Channel is to do any sort of Skylanders Battle Mode.  As most of you know, I tend to record late at night and solo...It is just a product of when I have free time...I work during the day, run errands after work, make supper, take care of what has to be done, and then when I do have free time, I enjoy playing games.

Not too many folks are around at 2-3 AM during the week to join me in Battle Mode.  To make up for it, I started the Skylanders Poll Battle Series.  While it isn't quite as action oriented, it is fun, and adds a unique element to the blog and the channel.

That said, sometimes I do get an opportunity to have someone over and record with...That is usually my Nephew (aka thewalkthruking) and that was the case this past weekend. 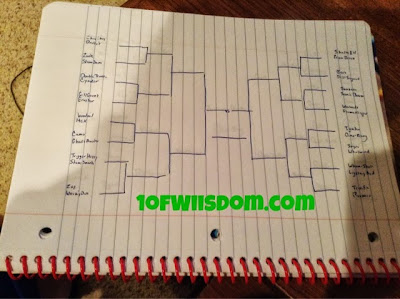 He stayed the night Friday (school here started up today, August 26th, 2013) and we put in some time playing Skylanders: Spyro's Adventure.  This was all his idea, but he decided that he wanted to do a "Blind Draw" (Pokemon Style, drawn from a cup) SSA Matchup.  He initially wanted to do ALL the Skylanders, but we need some workable number for a tournament...so we went with 32 and since he wanted the Castaways involved, we elected to go "old school" and utilize the Original 32 from SSA.

We recorded the 1st Round of 16 matches that night, and Saturday we finished up the bracket.  We both had a lot of fun.  That said, I'm use to box-stock Skylanders and many of these guys had been sitting dormant for a long time..Plus, we never really get to play Battle Mode much...needless to say there was a re-learning curve...The best path for Story Mode isn't always the best path for Battle Mode...that said, all the Skylanders were fully maxed out and we enjoyed going head-to-head.

We set the battles up as follows: No Items, No Arena Hazards, No Powerups....We wanted a true Player vs Player experience not skewed by add-ons.  Similarly, to keep it fair, each battle was randomly assigned a course by way of my Nephew closing his eyes and tilting the Nunchuck's Analog Stick left and right.

The only real disadvantage for me is that I let him select his character first...every time.  In the future we might set up teams, rotate, or let me pick the characters first, bahahahaha!

Anyway, to try and keep dropped frames a non-issue we recorded each match individually...Ironically only one match had any drops even worth noting.  Go figure.  That said, my issue is that they take a LONG time to edit...I combined Round 1 of Brackets 1 & 2 and the rendering took several hours...as such, I kind of modified the plan and broke it down into groups of 4 Battles...which is interestingly, what we had planned to do early on...then we changed course.  Again, go figure.

Without further ado, here is our Skylanders: Spyro's Adventure Original 32 Blind Draw Tournament!
*Please note, due to editing and other issues, the "Parts" I speak of may not match up to what you see below...When in doubt, go with the blog.  That said, the video titles and upload order (as well as the playlist) will set you in the right direction.

That wraps it up!  We hope that you enjoyed our SSA Throwback Tournament!  If time allows, we will continue to record Skylanders Battle Tournaments!
Posted by 1ofWiisdom at 4:52 AM