What: Beyblade Shogun Steel Ifrit Salamander Fire Synchrome 2 Pack
Where Did You Get It: Toys'R'Us
What Did It Cost: $16.99 ish plus tax (honestly don't remember, just go with less than $20)
What Was Stock Like: Well Stocked...store just set up the display!


Something I've had for quite some time, and have wanted to get opened up and tested out is a big box of Beybades.  I got a good deal on some back around Christmas...That said, the displays had grown stagnant, always having the same things, and never any Beys my Nephew was looking for...

After just 2 weeks of not checking our local TRU restocked with the new Shogun Steel line!! 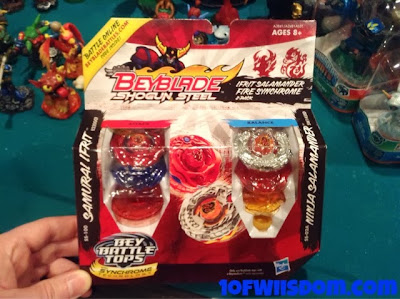 We caught the display, figured out what it was all about, and decided to just stick to the Beyblades for now...The rest can come later.

I picked up a Two Pack and a couple of singles to have us some cool, new Beys for the summer.  This past week, we FINALLY got around to opening them, lol.  The two singles are still waiting...along with a nice assortment of the old guard.

The Blade that caught my attention was Samurai Ifrit...looked great, even i the packaging.  Lucky for me, my Nephew decided to stake claim to Ninja Salamander (the battle videos are coming!!  I had to get the Skylanders Castaways vs Newlanders stuff cranked out first!).

That said, we were both very excited to unbox these new Beys!  Just for the record, I know realize that Shogun Steel is basically our version of Zero G...Last I checked around I was under the impression Zero G was going to launch here in the fall on Cartoon Network and have toys out before Christmas...I didn't realize that the toys were here and under the Shogun Steel line.  And yes, this post is being typed BEFORE the video is uploaded and LIVE on YouTube...not that many commenters will come here and check...oh well.

The coolest thing, in my opinion, about this pack was the E230 Spin Track on Samurai Ifrit...The Elevator Disk concept is really cool.  I think my Nephew's favorite feature was the way the Warrior and Element Wheels tied together.  Check the box for the breakdown: 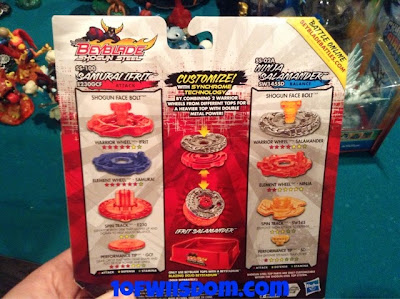 Anytime I can unbox with my Nephew, I like to do it...especially with Beyblades since he is more attuned to the community than I am.  We recorded a showdown between Samurai Ifrit and Ninja Salamander right after unboxing!  We also tossed in a few other battles...Be on the lookout for that video!
Posted by 1ofWiisdom at 4:10 AM