What: Mario & Luigi Dream Team
Platform: Nintendo 3DS
What Did It Cost: $39.99 plus tax
Where Did You Get It: Toys'R'Us
What Was Stock Like: Plenty

Sunday, August 11th, 2013 was a big day for fans of the Year of Luigi, and Mario RPG fans in general.

The Year of Luigi celebrates the 30th Anniversary of Luigi's debut and has already included the 3DS hit Luigi's Mansion: Dark Moon and will usher in New Super Luigi. U here in two weeks!

The game looks quite enjoyable and follows much along the line of what you see in Bowser's Inside Story.  While this is an RPG, it has a lot more action that your typical, turn-by-turn title.  A staple of the Mario & Luigi RPG series is humor...this one seems no different with the back cover boldly dubbing the game a "hilarious action RPG."

My Nephew is a big fan of these games and I am looking forward to playing it myself.

The best deal we could find was via Toys'R'Us.  While all retailers had the game for $39.99 with no major sales, TRU did have a nice promotion.  When you purchase Dream Team (and yes, it is limited to this title), you can get ANY Video Game Accessory (think stylus, cases, cleaning supplies etc), or Strategy Guide price $19.99 or less, for $0.99.  That my friends is a sweet deal!

Now, before you jump up and grab that pack of $9.99 rainbow stylus pens, think about it...If you max it out, you save more in the long run...

My Nephew latched on to one of the final copies of Pokemon Black 2/White 2 Strategy Guides and after some consideration, I walked out with New Super Mario Bros. U.  My decision was two-fold: it was in good condition (no tattered corners) AND it was the first big Mario title to the Wii U..I'm thinking long term here, lol.  I was tempted by Skyward Sword, ACNL, and MLDT, but ultimately went for the big ticket item...Plus, I knew it would have cool artwork...I was right!  The maps are very nice and I've enjoyed reading up on the new enemies etc.  I often times appreciate strategy guides more for their thorough explanation of the characters than the actual gameplay hints.

Anyway, we both left quite happy and that is without even putting much stock into the hours of enjoyment we'll no doubt get from Mario & Luigi Dream Team.

If you have never played a title in the series, I would suggest you watch some gameplay vids, or study up on the trailers.  These titles are not your conventional platformers most think of with Mario games.  That said, this series is also not your conventional RPG that most bring to mind.  The Mario & Luigi RPG is kind of a "Mario" twist on the RPG...expect a lot more action, some comedy, and a crazy cast of characters to ultimately form a very memorable story line.

The unboxing is by no means great...I seamlessly edited 2 stop points (text and email of high importance), and was (cough, am) very tired.  Between having to start and stop 3 times (can't forget the batteries died!), it rambled on a bit longer than I intended.

That said, you get a decent look at the game case, the game cartridge, and insights on the best deal for launch week!  My apologies for the rambling and lack of detail...there isn't really a lot to showcase here with the limited art work etc.

If you do pick up Mario & Luigi Dream Team, make sure to register it ASAP with Club Nintendo for 50 Coins!  I'll see you back in two weeks for New Super Luigi U!! 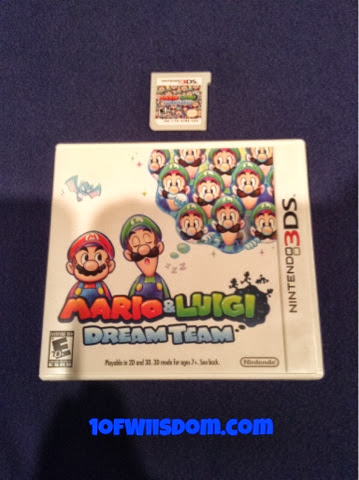 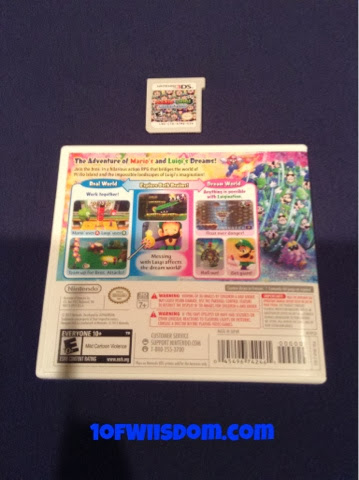