What?  Pokemon Rumble U NFC Figures
Where Did You Get Them?  GameStop
What Did They Cost?  $3.99 plus tax
What Was Stock Like?  One Box on the Counter

Opening Up Two Pokemon Rumble U Figures: Piplup and Darkrai

NFC...Near Field Communication...that little area on the Wii U Game Pad just below the D-Pad.

Pokemon Rumble U launches here in the US on Thursday, August 29th, 2013 for $17.99.  You can get it via the eShop on the Wii U, or via download card at GameStop.  If you pre-order, or pick up while supplies last, from GameStop you can get in on Legendary Black Kyurem or White Kyurem.  I plan to get in on that!

The Rumble U Figures are a little smaller than Skylanders Sidekicks if that helps you determine the scale.  The cool thing is they only cost $3.99...the bad thing is they come in blind capsules so you will literally have to will your way to landing the complete set of 18.

That said, if you are running tight on cash, the figures are not necessary to play the game, unlock any additional content, or aid you in ways beneficial to someone not having the figures.  However, most Pokemon fans are diehards and these are cool, small figures at a budget price. Most folks can probably trade their duplicate figures with friends to make the process easier.

Regardless, you have do admit it is a neat concept.  While it is essentially the same thing we see with Skylanders, the goal here is just to have the ability to save character data and progress to the figure and then take it to a friend's house.  You simply place the figure on to load up...play the game...and then scan it back via NFC to save the progress...very slick.

What I was going to say earlier is that this game is special for two reasons:  First, it is the very first Pokemon game for the Wii U.  Second, it is the very first time Nintendo has used the NFC feature of the GamePad...this is something I could see them continuing, and under this set up, I would not mind.  The figures are optional, inexpensive, and really just something for diehards to collect.

My Nephew, a big time Pokemon fan, was really into this and very excited.  We plan to pick the game up Thursday and grab a few more figures.  They would be right at home in the living room, at the dorm, or even in the office.  The fact the figures interact with the game is a perk.

For kids who may not have been exposed to Skylanders, this would make a nice stepping stone.

I am excited to try out Pokemon Rumble U as it would be my first foray into the genre.  I've seen quite a few episodes of the cartoon, heard my Nephew talk about it for 2 years or so now, and despite him always playing the game on the DS, I haven't really gotten any hands on time like I have with other titles.

Again, the only real downside is that the figures really are "blind."  You won't know what you are buying...that can come into play when you have 17 and are trying to land the pesky last one to complete the set...My advice is find other players and work the trade circuit!

The figures are surprisingly well detailed for $4...they are by no means close to the scale of detail found on Skylanders, but they are far from being a cheap, junk type toy.  These really are nice, versatile add-ons to what will hopefully be a fun solo and coop endeavor game! 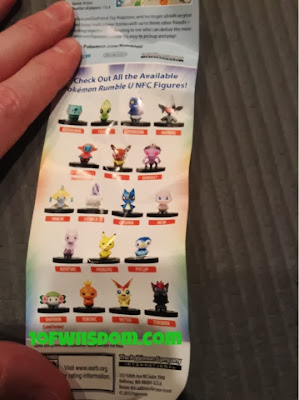