One of the best things about Gamescom taking place a few weeks after E3 and closer to the big Fall launch dates is the new info.

Activision and Vicarious Visions' big Skylanders title SWAP Force was once again prominently featured for everyone to check out.  While not being there means we can't ask questions, check out the figures in person, or enjoy more of the gameplay, it does mean that we get new information!

This time around it looks like the strategy was to reveal some info on 2 Swappers and 2 of the New, Core Characters.  That broke down to a showcase of Boom Jet and Grilla Drilla for SWAP Force Skylanders and Slobber Tooth and Zoo Lou for our SWAP Force Newlanders.

Let's take a look at each...Also note you can scroll down to see the character bios, official artwork, final toy pose, and screenshots!


No matter what Boom Jet did, he always had to be the best.  He could be seen day and night above his home in the Billowy Cloudplains gunning his engines and performing daredevil maneuvers as he trained to become the best sky surfer in all of Skylands.  Unfortunately, Boom Jet never had a chance to compete for the championship because a day came that changed his life forever.  The Darkness had come.  And with his town on the verge of being completely consumed by the ominous evil force, Boom Jet took action.  Using his incredible flying skills, he raced from house to house, rescuing all of the citizens and carrying them to safety… just before The Darkness destroyed his homeland.  It was then he realized the protection of Skylands was more important than personal glory, so he sought out Master Eon to offer his services to the Skylanders. 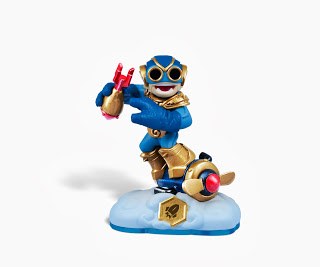 In the distant jungles of what was once the sprawling subterranean city of the Drilla Empire, Grilla Drilla served among the guards for the Drilla King.  Every seven years, the king would select the bravest and strongest guard to become their leader.  It was during the last selection ceremony that a troll mining operation broke through the ground above them and quickly snatched the king, wanting to know the location of the famed Drilla Diamond.  Having never ventured above ground, Grilla Drilla risked everything to defeat the trolls and rescue the Drilla King.  In return for his bravery, Grilla was selected as the new leader.  But he instead decided to join the Skylanders, where he could protect even more residents of Skylands. 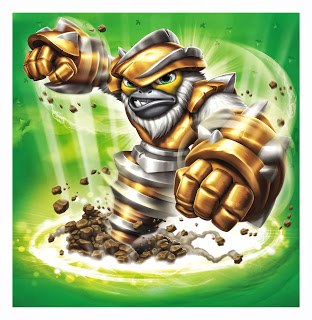 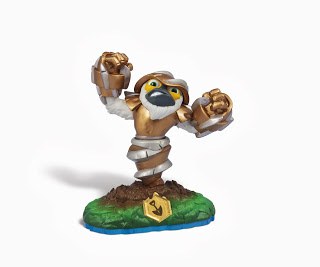 Having been asleep for thousands of years, Slobber Tooth was awakened by the fiery eruption of two volcanic islands crashing together.  Immediately sought out by Kaos to become one of his minions, Slobber Tooth was promised great power.  But the gruff and headstrong fighter chose to follow his own path instead.  For this, Kaos attacked his ancient petrified homeland.  As the only one who could protect his hibernating race, Slobber Tooth fought tooth and tail against Kaos and his minions, ultimately driving them away.  For his heroism, Master Eon asked Slobber Tooth to join the Skylanders, where he could continue defending Skylands against the evil Kaos. 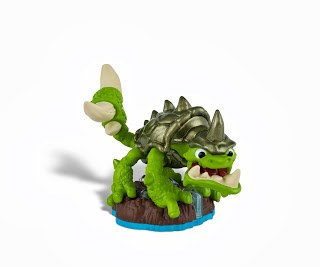 Descended from a long line of shamans, Zoo Lou traveled far and wide to the Seven Strange Strongholds – ancient, mysterious sites of great wonder in Skylands – where he studied the wisdom and fighting styles of the Seven Strange Mages.  After many years of traveling and studying, Zoo Lou returned to find an army of trolls had invaded his sacred homeland to mine its natural magic resources.  Zoo Lou’s warrior heart burned with fury.  And having now mastered the enchanted art of communicating with nature and summoning animals, he unleashed his great mojo – attacking the trolls and single handedly freeing his lands once again.  It was this heroic feat that caught the eye of Double Trouble, who then brought Zoo Lou to Master Eon and the Skylanders. 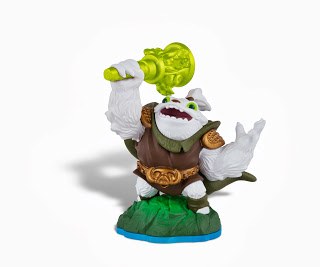